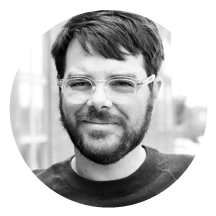 Eight years ago, Stanley Chase founded the Louisville Vegan Jerky Co. from a mistake in the toaster oven… Currently he is in charge of Brand Management and Innovation.

Company culture and current industry trends steer Stanley’s focus. Keeping the brand current and modern is important to LVJCo and is an important tool to keep our lead in the vegan jerky market. Over the past eight years, Stanley has learned by doing, how to run a business in the snack food industry. The vegan food sector is a small circle, and Stanley has securely planted himself inside it, having built deep relationships with many of the big names in the industry.

In 2005 Stanley stopped eating meat and started a vegan blog called “ate bit vegan.” His dad was a chef, so he started “veganizing” all his recipes, analyzing the counter parts of the meat components and incorporating plant-based replacements.

While living in Philly in 2009 he worked at Horizons, with Rich Landau, who was, at the time, the only Michelin Star vegan chef in the world. Stanley’s experience working with Chef Landau was the inspiration to start a food business in Louisville, a vegan food truck called Morels. The success of Morels prompted him to open a brick and mortar spot that quickly gained a cult-like following, attracting visitors from hundreds of miles away to eat his unique vegan take on familiar foods.