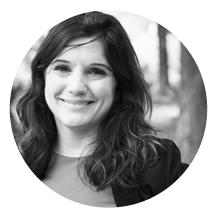 Sharon is the co-founder and president of Animal Equality, a leading international animal protection organization ranked as one of the most effective animal rights organizations in the world for three consecutive years by Animal Charity Evaluators. Animal Equality works in eight countries, has eleven offices in major cities, and a total of seventy employees.

Sharon has studies in Sociology and before devoting her time to Animal Equality in 2006, Sharon served on the board and worked at several animal protection organizations in England and Spain.

Sharon has been featured on international media, and Animal Equality’s campaigns and investigations have appeared on The New York Times, CNN, The BBC, The Sunday Times, The Guardian and El País. Sharon has also presented at conferences about strategy, factory farming and Animal Equality’s work at Harvard, MIT, New York University, The University of Vienna, Universidad Complutense de Madrid and others. She has also spoken at several key events such as The Effective Altruism Conference, The Chelsea Film Festival in New York, The International Animal Rights Conference in Luxembourg, and the National Animal Rights Conference in Los Angeles.

Sharon is also the founder and co-director of the book editorial named “LiberAnima”​ that promotes equality and justice towards animals in Spanish speaking countries through a series of key book publications. Books selected to be published by Sharon and the other two collection’s directors have sold thousands of copies in Spanish speaking countries.