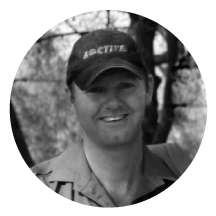 Bryce Clemence is the director and training instructor at Anti-Poaching and Tracking Specialists (ATS) in the Savé Valley Conservancy in southeastern Zimbabwe. As such, he and his team are responsible for coordinating the anti-poaching efforts in the Savé Valley Conservancy, an area of 2600 square kilometers that holds 25% of Zimbabwe’s remaining black rhino population.

Bryce believes that the key to saving the rhino is protecting the rangers on the ground who spend nights out in the bush tracking both poachers and rhino. Many rangers across Africa are assigned to anti-poaching units without proper equipment or training, and risk their lives for the sake of protecting the rhino. Without the rangers, the rhino have no chance.

The work of ATS is a family affair: Bryce’s wife, Lara, runs the internal operations of the project, and his brother, Shannon, recently returned to Zimbabwe after serving as a military unit trainer for the United States Air Force, Navy Seals, SWAT, and Marines to help run their ranger trainings. Pete, Bryce’s father, also helps by running a Junior Ranger program which trains Zimbabwe’s children in bush craft activities and teaches conservation as a core value.

In addition to their on-the-ground anti-poaching efforts, ATS also has a partnership with National Parks of Zimbabwe to train their rangers and anti-poaching units in tracking.

Both natives of Zimbabwe, Bryce and Lara grew up on Lake Kariba and have spent most of their careers in wildlife conservation. They live in the remote Conservancy with their three dogs along with their extended family.