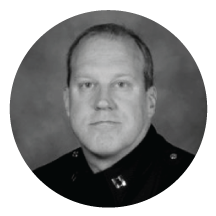 Captain II Sargent was born in New York City and was raised in Westchester County, New York. He moved to Los Angeles in 1983.

Captain Sargent joined the Los Angeles Police Department in 1993, and has been assigned to Northeast Area and Foothill Area as a police officer, and to Southwest and Hollywood Areas as a field sergeant. He was an investigator with the Department’s Gun Detail and Employee Relations Group and was assigned as a sergeant – investigator with Internal Affairs Group before promoting to Lieutenant in 1999.

As a lieutenant, Captain Sargent was assigned to West Los Angeles Area patrol and administration, and to Risk Management Group as an Officer in Charge. Captain Sargent spent approximately two and a half years as an adjutant to the Commanding Officer of the Consent Decree Bureau before promoting to Captain.