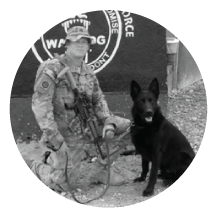 Ryan Henderson is a veteran of the United States Army. He served 6 years as an Airborne Infantryman, with the 82nd Airborne Division. Ryan studied Special Warfare at the USAJFKSWCS FT Bragg, NC. He served as a command Personal Security Operative, Assault Team Leader, Battalion Combatives Instructor, and M.W.D./T.E.D.D. (Tactical Explosive Detection Dog) Handler and Battalion K9 detachment Team Leader. He deployed to both Iraq and Afghanistan, and was MEDEVACed from Afghanistan in July 2012, resulting in separation from his K9 Satan.

Ryan has been searching for, and attempting to recover, his K9 brother since the summer of 2013. He has been purposely misled by contacts from the U.S. Army, civilian contract agencies, and the Pentagon (OPMG). Despite all odds, he has located Satan, but the family who has him has refused to reunite them. Congressmen Mac Thornberry (TX), and Richard Hudson (NC) have taken the charge and sponsored a bill (H.R. 4909) that calls for additions and changes in laws to prevent the future abuse and mishandling of Military K9s and their handlers, and calls for an investigation into the mismanagement and violations of current programs. His story was first featured in the New York Post (Maureen Callahan), and has since been featured on Fox News Happening Now, CBS 11 DFW (Cristin Severance), and multiple online news outlets.

Ryan currently lives in DFW, TX with his wife and two daughters, and is a Fleet/Commercial account manager at Classic Chevrolet in Grapevine, TX. They have two dogs, one cat, one rabbit, and one guinea pig–all rescues!