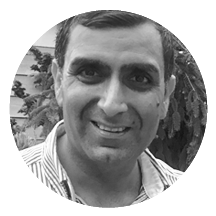 Dr. Paresh Kathrani joined CIArb in 2018 having spent more than 15 years in academia as a law lecturer, working on EU funded projects and researching legal technology and artificial intelligence.

Having completed his law degrees, the Bar Vocational Course and doctorate in law in London, Dr Kathrani worked as a Senior Lecturer in Law at the University of Westminster. Here, he was the module leader of Criminal Law for several years, as well as working on a number of EU funded projects. He was part of an EU Tempus-funded consortium of universities from the UK, Italy, Spain and North Africa looking at the role of human rights in higher education curricula; and participated on another EU funded project considering the contemporary lessons to be learned from the Second World War. The latter involved working with several European high schools. He was also the Law Liaison Tutor for the University of Westminster in its transnational education partnership with the Westminster International University in Tashkent, Uzbekistan, responsible for PhD students whilst working at Westminster Law School and a member of the Learning and Teaching and Research Committees.

Paresh’s research focuses on LawTech and artificial intelligence. He has written in these fields, including as a co-contributor on a submission to Parliament. He has convened several panels, worked on an EU funded project with a start-up in looking at how artificial intelligence and natural language processing can be used to triage law case and continues to write and talk in these fields. With an interest in how computer games and technology can be used in legal education, he was a co-founder of the Serious Games at Westminster (SGAW) group that produced several computer games for teaching criminal law, including a VR game which attracted national and international media coverage. Paresh was invited to talk at the Council of Bars and Law Societies of Europe (CCBE) ‘Training of Lawyers’ event in Brussels on this.

He is passionate about mediation and education and continues to engage in research on educational trends. Apart from technology, he looks at education strategy. He is a father to two children and enjoys watching football and reading.