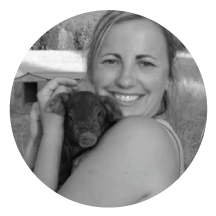 Kendra Kimbirauskas grew up on a dairy farm in the Midwest. After earning her degrees from Michigan State University she went on to work as a community organizer for the Sierra Club helping communities that were threatened by factory farms. Kimbirauskas’ community organizing work took her to rural communities in Michigan, Illinois, Iowa, and Minnesota before she moved to Oregon in 2003.  Kimbirauskas took a brief hiatus from anti factory farm organizing and spent time working on political campaigns for the Oregon League of Conservation Voters. In 2005 Kimbirauskas co-founded the group, Friends of Family Farmers an Oregon-based non-profit that organized to fight Threemile Canyon Farms, a 55,000 head dairy outside of Boardman, Oregon.  In 2006, she began consulting work for the Grace Factory Farming Project in addition to starting a small farm in Colton Oregon. In 2012, Kimbirauskas became CEO of the Socially Responsible Agricultural Project, a group that works with rural communities that are threatened by factory farms.  Kimbirauskas and her husband Ivan currently farm 46 acres, where they raise heritage breeds of pigs, chickens and turkey.